I’ve definitely been working too much. Seven days a week  with just three days off since the middle of September. One of the joys of being self-employed!

Now that the various projects are delivered I can give the Mantula the attention it deserves.  This means there’s been quite a lot of progress considering this build normally progresses at a geological pace.

Much better than new

In the previous instalment I reported that the engine had been dispatched for a complete rebuild.  Well, it arrived back yesterday looking very smart and probably better than new. It’s still sitting on its pallet,  but I’ll get it mounted on the engine stand tomorrow. There are several important parts to attach too.

The flywheel has been modified to accept the ignition trigger ring. Once that’s mounted the up-rated clutch can be installed.

The original clutch was Rover SD1 3.5 litre spec which wouldn’t be able to cope with the much greater torque from the modified 4.6 litre unit.

The front end will get a new water pump along with various brackets and sensors. More on this in a few weeks – I have to modify the serpentine belt routing so that it clears the steering linkage.

It was quite some time ago that I had the low profile sump fabricated, so it will be wonderful to finally fit the thing! That can happen as soon as it returns from getting its Zinga galvanising coating.  It’ll also have an abrasion resistant ceramic coating. I’m using the sump as a practice for getting the chassis treated.

When everything’s fitted I’ll squirt some Double TT into each cylinder to prevent possible condensation rust damage until first start some time next year.

The chassis is booked-in for modification during the second week of January. I still have work to do on the rear end design where I’m diverging from the standard Marcos IRS set-up a little. The 3D CAD drawing will be finished next week. I’ll then get the new suspension mounts and various brackets cut out on a CNC plasma cutter.

Some time ago I showed the designs for the Jenvey throttle body adapters which I had 3D printed here on the Island.

Unfortunately I made an error by severely underestimating the correct throttle size. Now rather than the original 48mm size I will be fitting 60mm or larger Jenvey items.

Here’s the revised design in Fusion 360. I will probably have to build in some strengthening webs.

These 3D printed items are just for testing, more robust items will be fitted when I’m certain that everything works correctly.

The throttle body size error was noticed by the very helpful Daniel Lloyd from Lloyd Specialist Developments in Warminster. They’ll be setting up the Canems engine management system for me and fine tuning it on their dyno.

That’s all for now. I’ll try to keep these updates more regular while there’s something going on.

Wow, it’s really been three months since I last worked on the Marcos! Sometimes other things get in the way. So it’s been months of DIY and decorating that has left the Mantula untouched. Hopefully I can get back to it in December. In the meantime here’s a picture…

Today I collected the results of my experiment with 3D printed parts. In a previous post I showed how I was designing a revised inlet system using two new throttle bodies to replace the standard Range Rover part. The design has matured a little and the geometry is now fixed so it would be great to get the parts manufactured.

This is a screen capture from the Fusion 360 CAD program showing the adapters in place on the manifold. 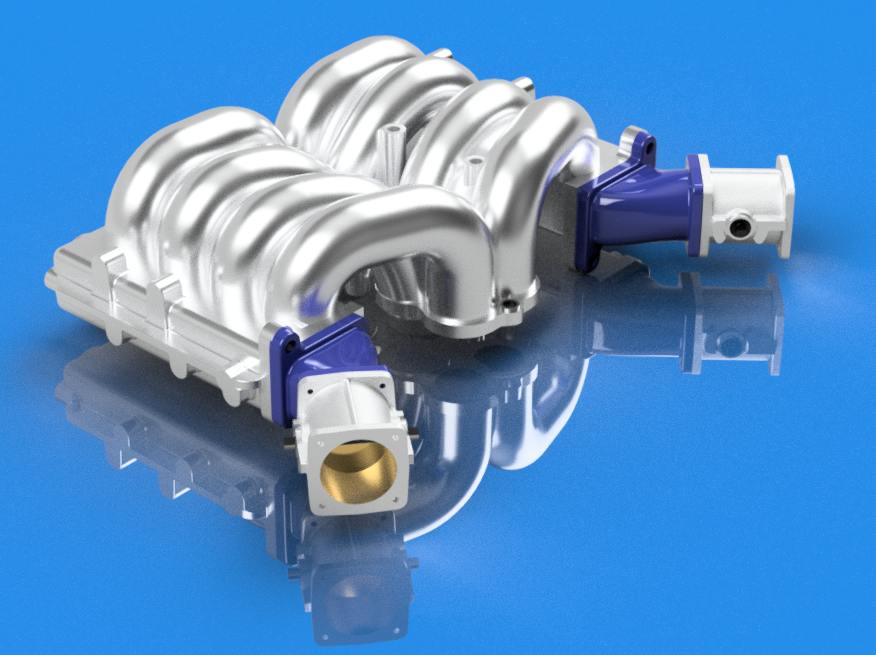 This is the result, printed here on the Isle of Wight by Island 3D Printing. 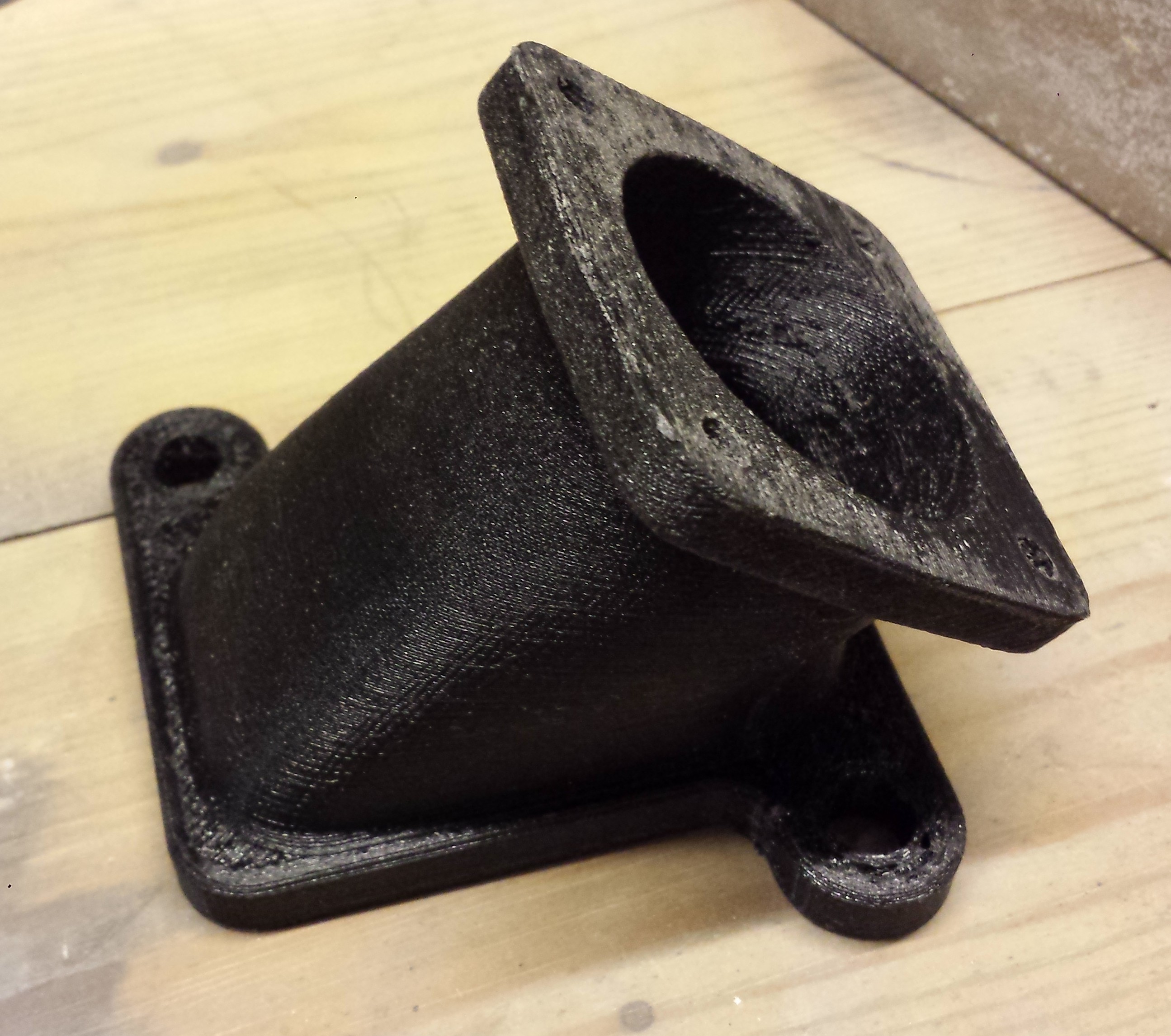 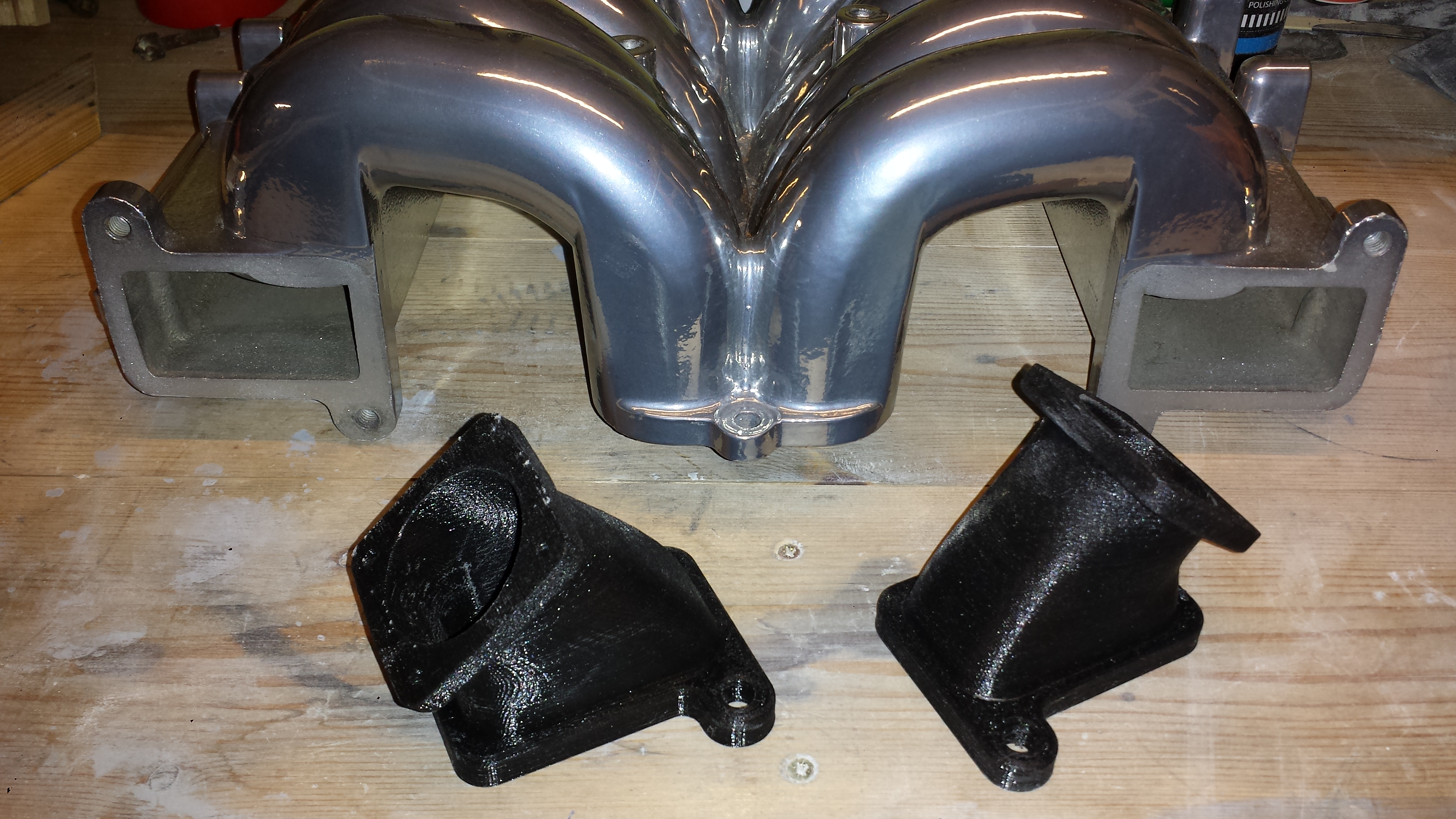 And here’s one of the adapters with a throttle body attached. The oil filler tube will have to be relocated before I can mount the other side. 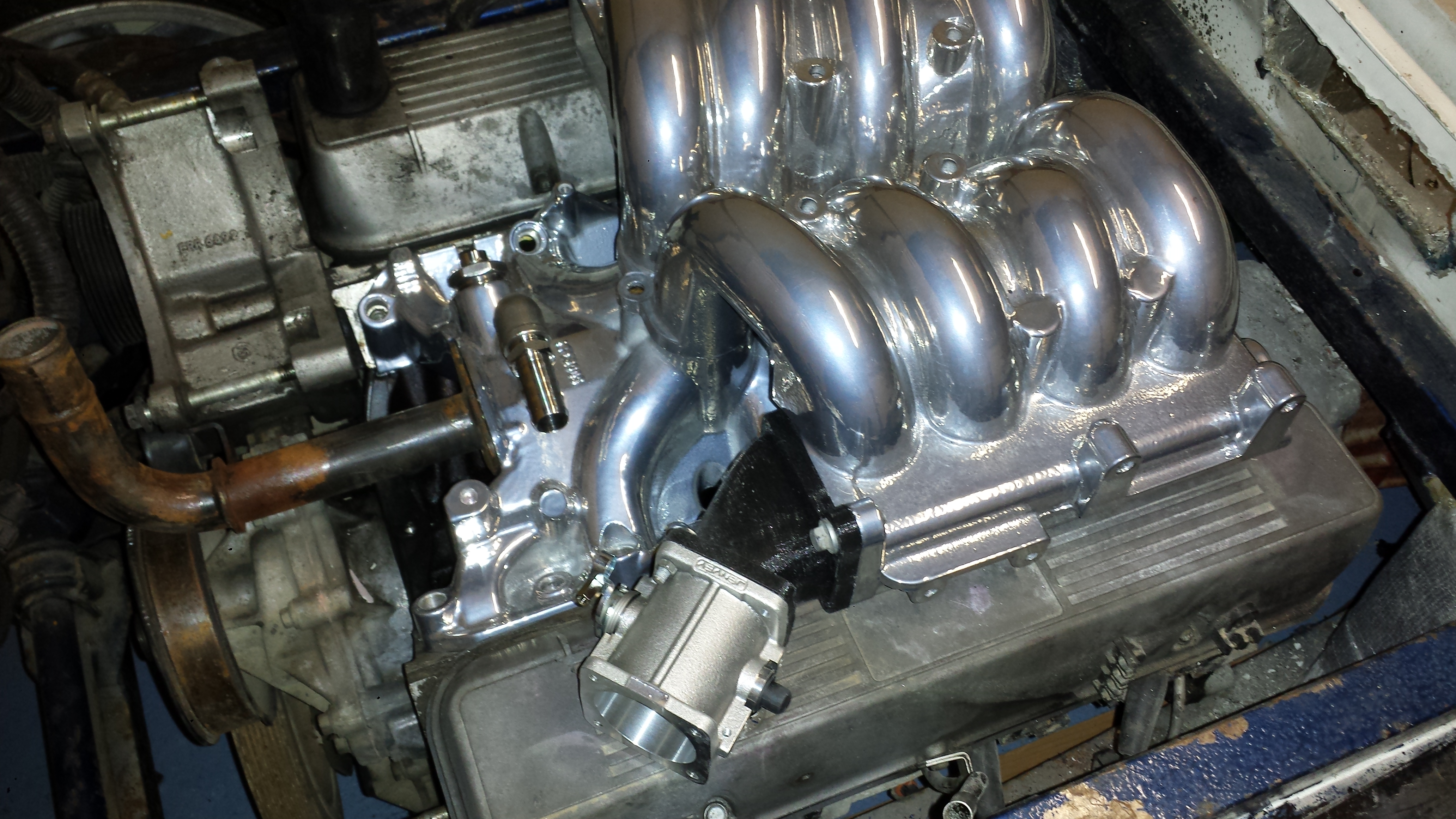 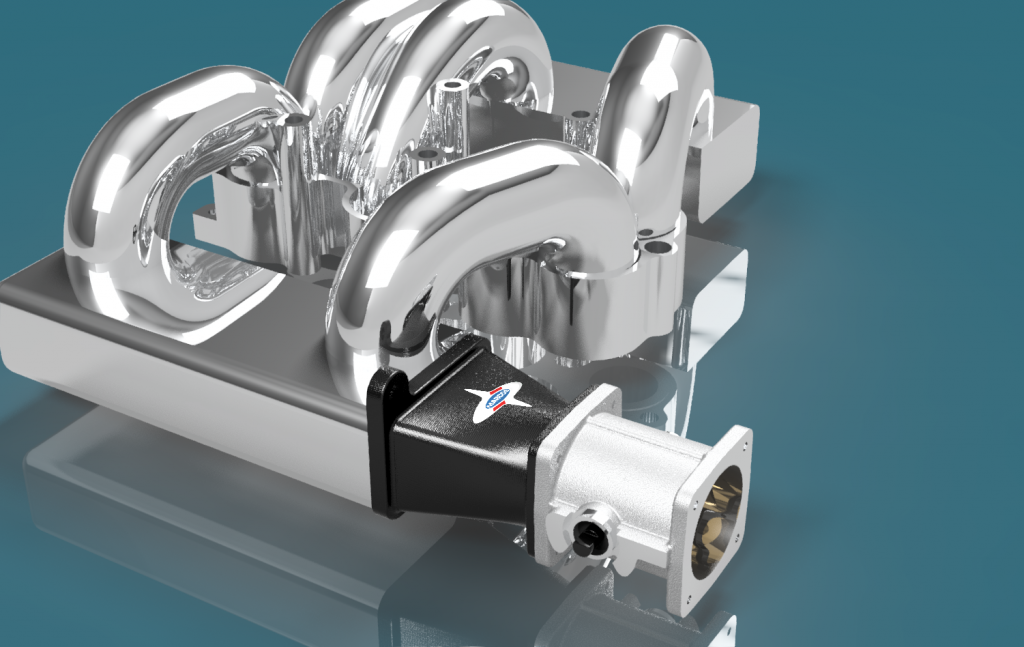 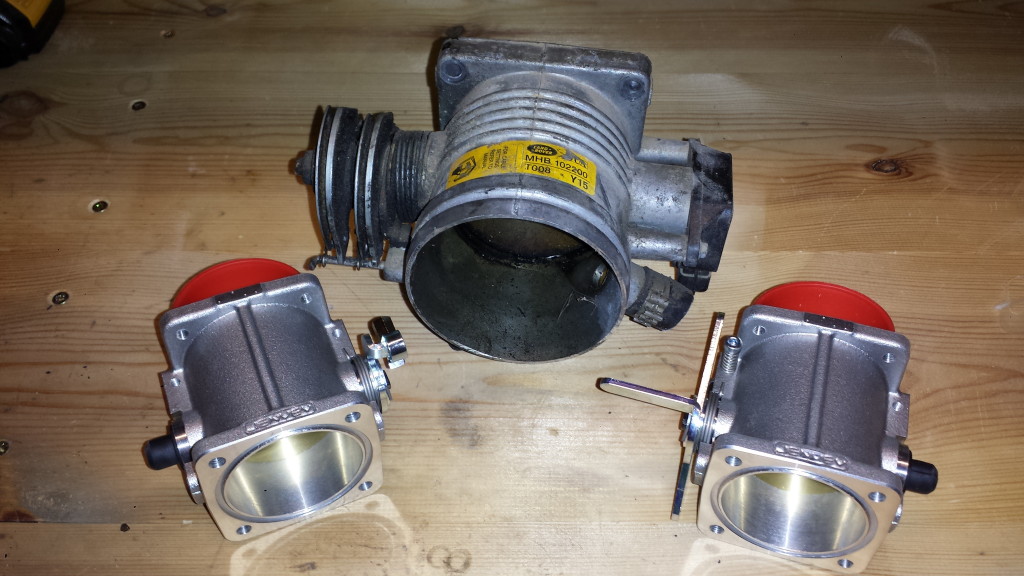